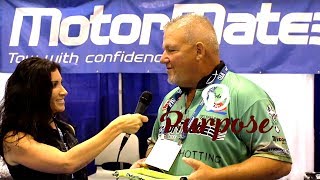 We caught up with Clifton Bradley from MotorMate at the 2017 Orlando ICAST Convention to find out the PURPOSE of MotorMate. The founding of MotorMate Claude Gouge, who is an avid fisherman, minister and owner of Silverstone Fabrication, had worked on boats most of his life. He decided that his motor support was not stabilizing his engine to his satisfaction. He started designing a new support bracket that would totally secure his engine during trailering and the MotorMate was